By Morpheus In The Shieldmaiden Blog 8 comments

Yesterday, I awakened quite suddenly with a sovereignty ritual unfolding in my head. It’s been on my mind to write about sovereignty for this blog – prompted in part by the urging of my matron Goddess to teach sovereignty, and also in part by my observation that there are a lot of mixed conceptions out there as to what sovereignty is and what it may mean for us both personally and collectively. So today I write of sovereignty. It is a deep and broad topic, worthy of books in its own right, so I cannot say everything there is to say about it. But I will try to begin.

The most immediate definition of sovereignty, and the one most people are familiar with, is the modern collective notion of sovereignty, which is essentially self-rule of an autonomous people or nation. We see this aspect of sovereignty being discussed with regard to the rights of Native American tribes to treaty rights as sovereign nations, for example.

In the circles I move in (Pagan left-coasters, for the most part) sovereignty is often spoken of in the context of personal empowerment, autonomy, and self-possession. There’s an awareness that as spiritual practitioners and empowered individuals, we should be seeking full ownership of our own lives, to become “the monarch of your own skin,” subject to no one, answerable only to our own inner guidance. As a personal spiritual practice, yes, sovereignty encompasses these things.  I keep feeling something’s missing from this understanding of sovereignty, though. And it was this missing something that woke me up in the late dawn. 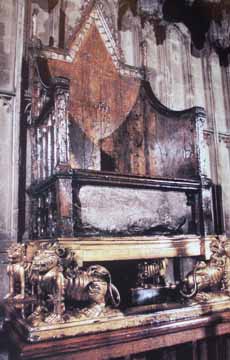 Let us go back to origins. Sovereignty, in its historical context in Celtic culture, appears centrally and pervasively throughout many of the foundational Irish myths, including the early mythological tales, the heroic cycles, the pseudo-historic annals of kings, and on down. Many of the famous battles around which the mythological tales are spun are presented as battles for sovereignty; and many of the important and storied kings have sovereignty legends told about how they were marked for kingship and vested with the power.** The sovereignty themes are continued in the early medieval Welsh tales and the British Arthurian and Romance Grail mythology. Reflections of these mythic themes are preserved in the rituals and customs of the monarchies as well as folk custom. Sovereignty myths typically include certain classic features: victory in battle under prophecy by, and supernatural aid from, the sovereignty Goddess; the stone that cries out under the foot of the true king; the sword that is pulled from the stone, or given by the hand of the Goddess; the ritual union with the Goddess in the land; the cup from the Otherworldly wellspring that is offered in token of sovereignty given.

These themes are deeply woven throughout all of the Celtic literature, right back to the oldest written texts. They express a fundamental concern of the culture: How shall our land and our people be rightly governed? And, further, how can we know who is fit to lead us? This, then, is the central question of sovereignty: the question of fitness to hold power. It is no different from what troubles us today in our own societies.

The answer of Celtic societies, generally speaking, was this: Let the land choose the sovereign. The sovereignty was understood not primarily as a social contract between subjects and kings, but as a natural force: a numinous power within the land, which was vested in the person of the ruler by the source of the power, in the shape of the Goddess of sovereignty. Thus the symbols and vessels of sovereignty were embodiments of the land, through which the soul of the land was understood to make its will known. The Lia Fail, or Stone of Destiny, was the primary embodiment of sovereignty demonstrating this principle – it was said to cry out under the true king, acting quite literally as the voice of the land. We also see the embodiment of the land coming to life in the form of a Goddess who confers victory in the contest for sovereignty, and who bestows the kingship on the one She has chosen. Her hand rises from the lake, offering the sword; or he meets Her and mates with Her in a flowing river; or he meets Her in a Faery mound, where She offers him a cup to drink. Everywhere She arises with waters, the wellspring of the life within the land. That life force itself is the sovereignty.

This notion that the sovereignty is itself the very life of the land has powerful consequences for the one who is tasked with holding and wielding it. In the tales, every judgement and act of the sovereign are manifest in the life of the land. So long as he makes truthful and fair judgements and acts rightly, there is prosperity in the land; cattle grow, milk is plentiful, grass is lush, trees come in fruit, the rivers run with fish. But when there is an unjust king; if he makes false judgements, if he does not carry that power rightly, the produce withers, the grass will not grow, the cattle will not calve, and even the walls of the royal fortress may shudder and fall.

Because, you see, the power doesn’t only flow from the land to the sovereign – it flows through him and back to the land. In the act of taking kingship, he has both literally and symbolically merged with the land (thus, the mating with the Goddess of sovereignty). When he takes up the kingship, his life is no longer his own – it becomes one with the life of the land.

So here we have that missing element. Sovereignty is not equivalent to freedom or autonomy. To be a sovereign is to be bound.  He has not simply claimed the sovereignty; he has been claimed by it.

This notion was deeply held, and was understood quite literally in early Celtic society. The rigorous requirement of kingship was complete integrity, in body and soul – to the point that even a physical blemish or injury on a king was considered a threat to the health and integrity of the land. Enter sacrifice: the fate of the sovereign. In some times and places, this may have meant literal sacrifice, as the king who was weak, injured, or no longer serving right judgements might be physically sacrificed to renew the life of the land. In other times and places, this simply meant that an injured or unjust king was required to step down and pass the kingship to another. Instances of this are clearly iterated in the mythological and historical literature. This, too, is sacrifice.

So what does this mean to us now in terms of sovereignty as a personal spiritual practice? There is much to be said about that, but what I want to convey today is that personal sovereignty isn’t a principle that can be boiled down to “I’m in charge of myself and you aren’t the boss of me.” The lore of sovereignty teaches that it is intimately connected with integrity; that sovereignty conveys a model of power where the only true authority arises from integrity. That sovereignty can be claimed by force, and sometimes must be, but can only be held through justice and integrity. And further, that the practice of sovereignty is one of commitment – full and unreserved commitment of one’s very life force – to the honor and benefit of that which we claim as ours. Thus, sovereignty cannot be separated from the fundamental values of service and sacrifice.

**Note: I write here of kings in the masculine gender, because historically speaking, most of the source material refers to male sovereigns. There were of course many powerful queens in Celtic societies throughout history, but they are notable exceptions, and certainly the mythology and folklore of sovereignty is highly gendered and consistently refers to a male sovereign and female sovereignty Goddess. Of course, when it comes to personal sovereignty as a spiritual practice, we adapt this model to be spiritually suitable for all sexes and genders of people. So when referring to personal sovereignty, I try to avoid gendered language, but I preserve it when speaking of history and lore.

8 comments on Rites of Sovereignty