By Morpheus In The Shieldmaiden Blog 4 comments

Recently I’ve been seeing more emails from folks who have begun feeling the Morrigan’s call for the first time, asking me for guidance on how to integrate Her into their lives and spiritual practice. So I felt it was time for a few posts about that.

This is what I frequently hear: “I’m being haunted, and I find it both terrifying and compelling. What do I do?” 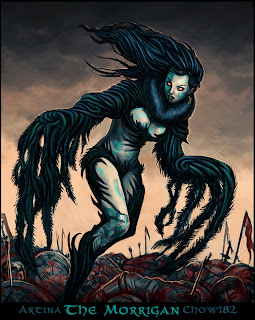 The Morrigan chooses people. When this happens to us, the experience is like being haunted by something. People often speak of Her coming to them in nightmares, or at least disturbing dreams. Her presence might be felt in waking life as a shadowy, spectral presence that seems to loom over us, and to follow our steps. She is, after all, the Phantom Queen. Her presence can also be channeled into our lives in unsettlingly personal ways: relationship dynamics may take on a charged quality; we may suddenly find ourselves fiercely intolerant of limitations we once accepted; we may find ourselves driven to take a stand on something. Her presence is characterized by compelling attention to certain things: the dead, and death itself; warfare and violence; heroism and honor, kinship and loyalty; and viscerally ecstatic experiences – blood, rage, sex, grief.

So the question that I get from people is, “What do I do?” The answer depends on what you want, and what you dare. Being Hers means a lifetime of being haunted, to at least some degree. It means those close to you being haunted to some degree as well. Those She claims may find their lives being reshaped, sometimes painfully, to make space for Her demands. It means you yourself will be reshaped, and this can also be quite terrifying. But here is what She offers in return: She makes a weapon of you. She delves into your soul and finds the strength, the fierce unconquerable will, the heroic heart you didn’t know you had. She offers you greatness. And She protects Her own, so Her claim also confers protection on both you and your kin. I could really go on for pages; perhaps that’s a post of its own some day.

People sometimes ask, “Why me?” I can’t presume to speak for Her reasons. But from my own observations, I can tell you this. If you think you aren’t cut out for Her service because you’re not tough or bad-ass enough, because you’re wounded, because you’re emotionally vulnerable, that may be precisely why She chose you. Experience has shown me that more often than not, it is those with raw hearts and poet’s souls that She chooses, rather than the stoic and macho among us. I think perhaps She finds a deep well of emotion provides a lot of raw material for shaping into Her creation, and a passionate heart is more readily sharpened to the fierce joy She cultivates in us. But there are many reasons. Some are chosen because of ancestry and blood. Some for reasons known only to Her and themselves. Some choose themselves and come to Her of their own volition.

You might have the option to decline the relationship if it does not feel right for you. If this is your choice, my very earnest advice is to be exceedingly respectful in your way of declining Her claim on you. The story of the great hero Cu Chulainn is a cautionary tale about what can happen: he not only refuses Her protection and guidance, he insults Her; and She brings about his downfall, giving him a hero’s death. So if you must refuse Her, do so with reverence and with gratitude for what’s been offered to you. And if you’ve ever asked Her for anything, if you’ve called Her name with feeling, I don’t recommend attempting to refuse Her claim on you. In Her world, you’ve already offered yourself to Her.

For those who choose to accept the claim and move into the relationship, a few thoughts on that question, “What do I do?”

The nightmares and the haunting are often Her way of gaining your attention. While being in Her service does mean always being a little haunted, the frightful quality that often comes with the initial contact will usually transform into a more intimate experience once you establish devotional practice. That devotional practice is a whole topic unto itself, so I will delve into that in a future post. For now I just want to close with a bit of advice for those experiencing the initial disturbances.

Your situation will be unique and personal, of course. Generally speaking, the first act you need to do to ease the disturbances and enter the relationship, is to acknowledge Her claim on you, and communicate your willingness to engage. Second, establish a regular devotional practice, with offerings and time in meditation listening to Her. This gives Her opportunities to communicate Her message to you, and begins to create intimacy. Over time this will tend to refocus Her presence into your devotional practice, thereby easing the nightmares and other uncontrolled manifestations. Third, it helps enormously to have a physical space or vessel for Her presence: a shrine, altar, or other space that you intentionally dedicate and invite Her to occupy. This helps to externalize Her presence so that She does not have to constantly occupy your dreams and waking mind in order to have a foothold in your life. It allows you some measure of control over when you engage with Her and when you choose to focus on other things.

Finally, a few resources, since people also ask me what they should read to acquaint themselves with Her. Here are my recommendations:

Source texts: The main source material for Her lore is a handful of Irish texts, most of which were written down in the medieval period by monks, recording a much older stream of oral literature. The texts in which She appears most significantly are the Lebor Gabala Eirenn, or Book of Invasions of Ireland; the First and Second Battles of Mag Tuiredh; and several texts of the Ulster cycle, most especially the Táin Bó Cúailnge, or Cattle Raid of Cooley. She also makes appearances in many other texts throughout the Irish literature.

Analytical/folkloric studies: The most comprehensive work on the Morrigan is War Goddess by Angelique Gulermovich Epstein, a folklore dissertation that surveys all Her appearances in medieval source texts, and uses them to analyze Her lore and role in the Irish mythological and cosmological system. Second, I recommend this 19th century essay The Ancient Irish Goddess of War by W. M. Hennessy.